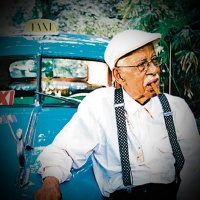 Pío Leyva looms among the giants of Cuban music. Though one of the most successful soneros of the pre-revolution era, he only earned international renown in his twilight years thanks to the landmark album and documentary Buena Vista Social Club. Born Wilfredo Pascual in Morón, Cuba, on May 5, 1917, he won a local bongo-drumming contest at the age of six and at 15 was tapped to sing with Juanito Blez's band Conjunto Caribe.

Upon relocating to Havana, Leyva lent his appealingly gravelly vocals to a series of acts including Orquesta de Jesús Montago, Orquesta Raqueteros del Swing, Orquesta del Paseiro, and Sexteto Colón; he also formed a trio sponsored by a local brand of coffee, Café el Angel, and was a fixture of Cuban radio. Leyva signed to RCA Victor in 1950 and in the years to follow cut more than two dozen LPs for the label, scoring a succession of smash hits including "Un Jardinero de Amor" and "Chapaleando." Nicknamed "El Montunero de Cuba" for his matchless improvisational acumen, Leyva recorded with the likes of Mariano Mercerón, Orquesta Cosmópolita, and Niño Rivera and also sang backup for Beny Moré, who popularized his best-known composition, "Francisco Guayabal." In March 1957, Leyva was in the studio collaborating with singer/guitarist Compay Segundo when rebel forces launched their assault on Cuban president Fulgencio Batista's Havana palace. According to legend, the session was later issued commercially complete with the sound of gunfire in the background.

Soneros de Verdad Presenta: Pío Leiva But while the revolution halted or terminated the careers of many Cuban musicians, Leyva continued his studio and stage career, appearing regularly on Cuban television while touring Spanish-speaking nations like Panama, Venezuela, the Dominican Republic, and Mexico. In 1991, he even mounted a four-month trek through West Africa, and five years later contributed his "El Mentiroso" to Juan de Marcos' Afro-Cuban All Stars project. While Leyva did not participate on American guitarist Ry Cooder's 1997 Buena Vista Social Club LP, which introduced much of the English-speaking world to Cuban masters including Ibrahim Ferrer, Rubén González, and Omara Portuondo, he did appear prominently in Wim Wenders' Oscar-nominated 1999 documentary of the same name. Leyva also toured as part of the Live from Buena Vista showcase, a package organized by German promoters and unrelated to Cooder's original project (much to the dismay of some concertgoers expecting to witness the same musicians they discovered on record). The exposure nevertheless elevated Leyva's international profile, resulting in the release of collections including Soneros de Verdad Presents Pío Leiva and Esta Es Mi Rumba.

The singer also remained in good stead with Wenders, and starred in the director's 2006 documentary The Sons of Buena Vista, a portrait of the next generation of Cuban soneros. Leyva did not live to see its worldwide release, however. He died of a heart attack in Havana on March 23, 2006, at the age of 88.