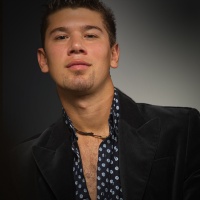 Dubbed one of "Silicon Valley's Most Influential Latinos," in the Northern California's "People's Choice Awards," Manuel Romero is well on his way to being one of the most compelling and significant musical forces in the new millennium. The people got it right again when People en Español wrote, "Manuel is good news for the music industry." Accustomed to performing live, Manuel often sings for sold-out crowds and venues. Having honed his musical talents in a vast array of musical styles, Manuel continually enthralls audiences with current top forty hits, melodic mariachi music, ballads in both English and Spanish, classical hymns, contemporary Christian songs, and self composed refrains that express his intrinsic talent and exceptional musical passion.Manuel has been an integral part of some of the most musically acclaimed venues todate. In January 2009, Manuel shared the stage with Jon & Madison Cain, Tony Orlando, Air Supply and Billy Bob Thornton at Tony La Russa's ARF concert. Manuel was also featured in the Off-Broadway musical, "Altar Boyz," where he garnered rave reviews for playing the part of sultry Latino swooner, Juan. Continuing with that same vein of musical production, Manuel also gained high acclaim as Richie Valens in the musical, "Buddy: The Buddy Holly Story," where he was described by StageSceneLA, as a "recording artist, heartthrob…with mucho sex appeal."

Having beaten out the majority of his opponents in NBC's "America's Got Talent," Manuel rose to the top of the pack, as one of the top twenty competitors. Manuel has also headlined at Shoreline Amphitheatre in Mountain View, California with television star, Wayne Brady.

Singing the national anthem for numerous high-level sporting events and teams, Manuel always moves audiences with his astounding vocal abilities. Having performed Mexico's National Anthem, he was commended for his exceptional musical talent by President Fox of Mexico and Mayor Villaraigosa of Los Ángeles, California.

Manuel has also sung for Pope John Paul II, during one of the pope's visits to Mexico, and was the lead headliner for the Cathedral Fest "All 4 One" musical production in Northern California.

Showing true musical flexibility, Manuel has been bold enough to rock out the MGM Grand Hotel in Las Vegas, but skilled enough to draw on his innate vocal talents to perform with the Silicon Valley Symphony and the Wind Symphony and Diablo Symphony Orchestras.

Because Manuel is more than able to successfully cross over from English to Spanish, Manuel has also traveled the country with various Mariachi Festivals, and has been featured on "Despierta America" and "Furia Musical." Along with this, Manuel has written a timely and relevant quinceanara song that is quickly becoming the quinceanara standard. Available on ITunes and promoted by Quinceaneras Magazine, countless young women and their families have chosen Manuel's song to usher in their special day, while a lucky few get the opportunity to have Manuel serenade them in-person.

With his freshmen, self-titled album, "Manuel Romero," Manuel received the International Trebby Award for Most Popular Album and Song of The Year. With much anticipation from fans worldwide, Manuel has recently released his long awaited album, "Orgulloso de Ser," and a series of religious songs compiled on the album, "Santa Maria." This talented young man now has a total of five albums that encompass his broad range of musical abilities and talents, from songwriter to impassioned vocalist and musician.

Aside from pursuing his musical passions, Manuel is active in many community service projects. As a mentor, he volunteers his time as a soccer coach for various youth teams. Manuel is also an official team leader for the Easter Seals "Walk with Me," campaign where he volunteers both his talent and time to raise thousands of dollars for this charity. As he pursues his passion of music, Manuel also excels academically. In summer of 2006, he took an educational tour through Portugal and Spain and was selected as a Scholarshiprecipient to participate in both the RYLA conference and the prestigious GRAMMY Camp.

Though Manuel continues to render sold-out performances on an international level, he does so while studying music and business at the university level. To learn more about Manuel Romero and his burgeoning impact on the music industry.