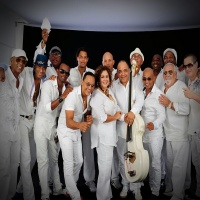 Virtually everything we know about Latin tropical music as we know it has been built upon the Top40 of a tiny Caribbean island, circa 1959. And that was enough. Cuba's legacy -- the son that became salsa the montuno that began mambo, the ddescarga that proved Latinos could jam with the best of jazz - has shaped the sounds of Peurto Rico, New York, and Latin music all over the world. But Cuba's musical development didn't end with the revolution. On the streets of Havana, even under economic blockade and ruin, the music continues to grow, change, adapt, and above all, swing. Stronger and harder year after year, as Cubans themselves have grown stronger and harder. This is the sound of Los Van Van... for over 30 years Cuba's ultimate dance band.

With the September 30, 2003 release of Van Van Live at Miami Arena, the band once again captures the spriti of its infectious rhythms while inspiring its fans at this legendary concert. With the double CD and DVD, Los Van Van proves once again that they are masters of Cuban dance music. The historic Miami performance was protested by 5,000 demonstrators. Escorted by police bearing shield and riot helmets, the screaming and dancing fans showed up to hear their beloved band them what they came to experience-- the spirit and joy of extra-ordinary music. A jewel of an album that some didn't want you to experience, Van Van Live at Miami Arena captures the excitement of an unprecedented Los Van Van show...one that will go down in history forever.

Feet accustomed to the suave sounds of romantic salsa may not know where to begin with Van Van. But the hips will. "In Cuba, people want to dance," says Van Van mastermind Juan Formell. "If they don't dance, forget it, they're not going to listen to you." The sound of Havana baking in the pre-millennial sun is so propulsive, so percussive, that the rhythms seem to hit from all directions at once. Not just the congas, timbales, cowbells, either... the bass is always in your face, the horns blaze even the violins -- Van Van's got two of 'em - attack with a relentless rhythm that can't just be contained by the clave -- this is Latin music on a rampage. Where did this incredible music come from? Credit Juan Formell, Van Van's founder and the musical director. Back in 1967, the guitar prodigy was doing time in Elio Reve's orquesta, a classic charanga band of flutes, violins, piano, string bass and percussion.

Under Formell's direction (and bass playing), Reve's charanga was reborn as Changui '68 -- with electric guitar and bass augmenting the orchestra. The dainty sounds of the charanga yielded to a new era in Cuban music, and Juan Formell's next move was to ride that wave with a new group, Van Van.

And that was it, really. Because Van Van has become synonymous with Cuban music. They've continued to grow with the tastes of this music-obsessed people -- no matter how heavy, psychedilic, jazzy, sweet, romantic or synthesized Cubans have desired their dance music to be, Van Van have delivered. They were the first Cuban band to incorporate trombones, synthesizers, drum machines, and the now-standard vocal trio into their ever-adapting sound. First the new beat was called song, the Afro-fusion of Cuban son with ritual Yoruba rhythms and American pop. Then it was called timba, the sound of Havana in the '90s -- where salsa would have gone if Beny More met up with George Clinton. Whatever the name, it's always been the music of Van Van.

As an over 30-year-old musical institution, Van Van has seen Cuba's finest musicians rise through its ranks. And that's saying something, in this country where "musician" is a 24-hour job. Much has been made of Cuba's master musicians, the elder generation who live and breathe the very foundation of Latin music. But Van Van is an intergenerational summit, a unique orchestra where masters disciples share a stage, each sparking off one another's creativity. Pounding the piano with Van Van since their inception, Cesar "Pupi" Pedroso is every bit the master musicion. Imposing, fedora-crowned baritone Pedro Calvo has dazzled audiences since the '70s; at his side is Mario "Mayito" Rivera, all of 24 years old and heartthrob, to boot. While maestro Formell powers Van Van with his mighty bass lines, his son Samuel answers from the afro-fitted drum kit. "The young musicians are very good, and they have had big influence on me and on the group," says Formell._ _Now, with all things Cuban at the height of international chic, the time is ripe for modern Latin tropical music to get back to Cuba. Says Formell, "Salsa has a lot of Cuban influences, but the salsa groups are more standardized, they follow more or less the same lines, the same tunes and sounds. The Cuban style is more open." Poised as they are for international domination, Formell and Van VAn are ready to take their formidative sound to the next level. "It's a fact that Cuban music has exploded worldwide," says Formell. "Cuba is a powerhouse in the development of popular music, and it was about time that it was recognized as such." Like Formell's super-orchestra, its name -- "Van Van" -- the group has continued to go, go, and go. On and on, innovating and expanding the power, scope, and future of Latin Music.

Los Van Van is an award winning group. The band previously won a Grammy award for best salsa album in 2000 for Llego Van Van... Van Van is Here (Havana Caliente). Also they were nominated for Latin Grammy in September 2000, the first year the Latin Grammys existed. They are currently nominated for a Latin Grammy in the category of best contemporary tropical album for their album, En el Malecon de La Habana, released on Pimienta Records/Havan Caliente/Universal Music Latino earlier this year. Los Van Van has produced 25 recordings, played all over the world and are credited with influencing the evolution of contemporary salsa.